November 05, 2012
Not a whole lot of cooking has been going on at my house this weekend, and I don't foresee it happening much this week.  We're having a hard time keeping our Kroger bill under $100/week.  Now, for a house of two people, I think this is a bit much.  Last week, after planning a bunch of meals, our bill totaled $165.  I have been saving every receipt since January and have ambitious plans of entering all that data and analyzing it.  I hope to have some wisdom to offer.

I did whip up a quick dinner on Saturday night that turned out to be pretty tasty.  The pictures, as usual, aren't so great.  If I do keep blogging meals, I think I'm going to use my better camera (instead of the iphone) and work on lighting.  I can get obsessive, and I don't want to go down the road of food styling and expensive cameras, but I do want things to look appetizing for you. 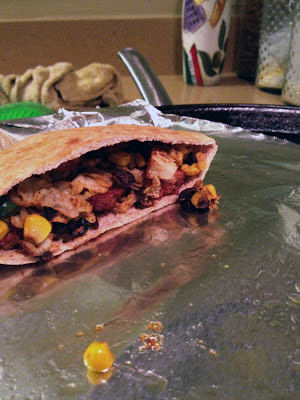 1 can fiesta corn
1 can black beans
1 small head savoy cabbage
3 jalepenos
2 whole wheat pita pockets
shrimp/tempeh or whatever else you may want to stuff in there
paprika, cumin, salt and pepper

So, I started by slicing the tempeh really thin and cutting it into circules so it looked like the shrimp i was making for the boyfriend.  Then, I marinated that in some bbq sauce and baked it in the oven until it got crispy.

I sauteed the cabbage and peppers in a pan then added the corn and black beans.  Then, I spiced it using paprika and cumin.  I also cooked the shrimp and set aside for the bf.

These are pretty plain and easy.  I made a spicy tomato sauce to go on mine, and the bf put Tabasco mayo on his.  I served these with oven roasted purple potatoes. 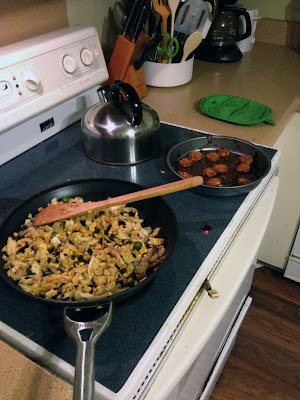 I probably won't be doing a lot of cooking in the following weeks, but I will be around Thanksgiving.  I'm restarting Eat to Live today, and so there will be a lot of salads and steamed vegetables.  I will probably blog about how it's going.  I think I will do a post tomorrow about ETL and losing weight (or struggling to) as a vegan.