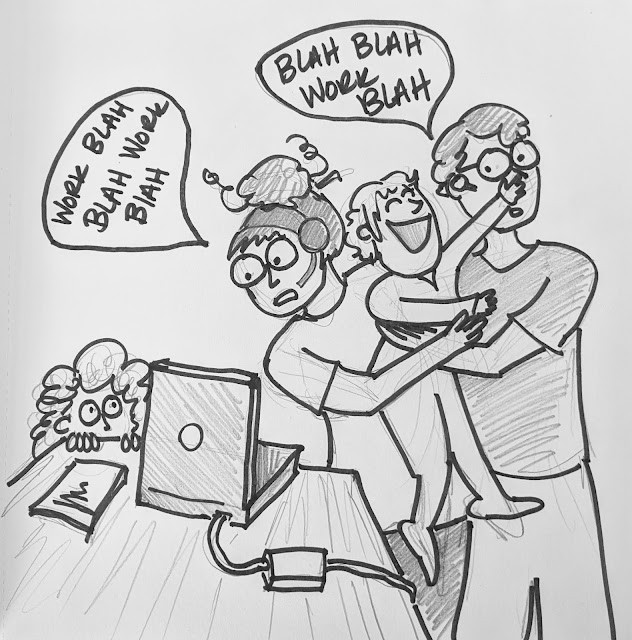 "Ok, my scrum starts at seven and should be over by nine."  My husband is staring at his computer screen while I hover over him with a cup of coffee.  His calendar looks terrifying.  There is one thirty minute break in the entire day.

"Shouldn't be a problem."

I take a deep breath and a long sip of my coffee.  It's six forty-five a.m.

As parents all over the country (and globe) try to balance work and home life, I have to say almost four weeks in that we're still drowning.  My husband is a software developer for a large company, and both of our calendars are filled with meetings.  After we have a quick check-in with each other in the morning, the day becomes a constant tag team effort of managing our two tiny humans.  We walk around the house with Bluetooth headsets in, simultaneous bouncing a baby and helping a toddler go pee, or making endless (ENDLESS!) meals and snacks.

To preserve our sanity, we tried to institute the rule that only one parent shall be present for bedtime each night.  This theoretically allows the other parent to get some much needed personal time, mostly opting to stand in the back yard going, "some day this will be over...some day this will be over."  I say tried to institute this rule because every night is a crap shoot.  We've had nights where I wave goodbye to my husband and older daughter at six-thirty p.m., catching a glimpse of the baby sleeping soundly on the monitor, and head out for a nice long walk, coming home to do yoga in peace.  Most of the nights, though, the older one is constantly on the hunt for me, screaming that she wants Mama to tell her, "JUST ONE STORY!" And then there was the night I went to check on the screaming baby for the third time and she projectile vomited on me...twice.

Since my husband has a seven a.m. call, I cram in what work I can before the kids wake up.  My strategy once they do is to get them moving as soon as their eyes open.  This usually ensures a good nap for the baby and some placid mid-morning mommy-has-a-conference-call-so-stop-asking-me-for-snacks screen time for the older kid.  The morning workouts lately have been dancing.  This is where I strap the baby to my chest and dance around screaming, "GET OFF THE COUCH! THIS IS EXERCISE!" at the toddler to a loop of "The Kidz Bop Shuffle," which is basically the "Cha-Cha Slide" but much, much more annoying.  As I move to the right, to the right, to the right, then to the left, to the left, to the left, I mentally count the hours until four p.m. rolls around and my husband emerges from his office to take the kids.  Then, it's time for me to get some work done, or you know, stare at the wall for awhile.