How Much TV is Too Much? 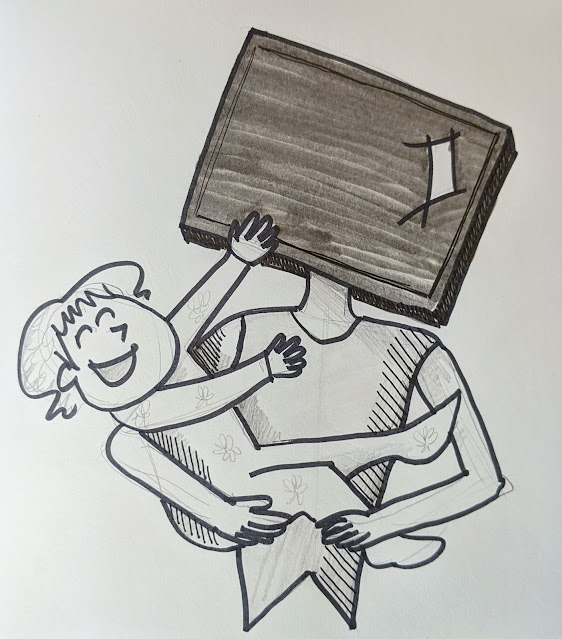 My three year old comes padding down the hallway, bleary eyed and curly hair wild.  Her first stop of the day is into our office, where she will ask my husband, "Can I watch TV?"
Unfortunately for her, the answer to that really depends on the day.  If it's the weekend, we're more inclined to start off with cartoons.  If it's the weekday and mommy and daddy have early meetings, then it's likely that PBS is coming on.  If her parents (aka us) are feeling particularly anxious about amount of television she's been consuming lately, then the battle begins.
"No, we're not going to watch TV right now," I'll say to her, and her face will drop.
"But why?"
"Well, Mommy has lots of meetings this afternoon, and you'll get to watch plenty of TV then."
"Can I play video games?"
"No! No screens!" I will exclaim in frustration.
"But I looooove screens," she will fire back.
What have I done?? I'll think.
Like a lot of parents, pre-pandemic me kept a somewhat regimented allocation of television.  When my older daughter was a baby, I'd get extremely anxious around any screens, asking my family to turn off the football game at Christmas or leave a restaurant because my daughter was too preoccupied with the giant TV on the wall.  When she turned eighteen months, we started letting her watch Elmo's World, which snowballed into movies, then TV, then somehow kids playing with toys on YouTube, which I HATE.  Eventually, though, we settled into a somewhat consistent pattern of a little more TV on the weekends and for the most part, no television during the work week.
That is, until the Ups and Downs, where all bets are off.  Now, I pivot back and forth between oh-my-god-she's-watching-so-much-TV-we're-ruining-her-for-life and IT'S FINE IT'S FINE IT'S FINE.  There really isn't much common ground.  Anxiety is a bitch.
I feel like this unknown time is so hard to navigate, and it's so hard to know what's the right thing to do for our children.  So, I've been thinking about TV like I think about healthy food.  Instead of saying, "I cannot have any chocolate cake, ever," I try and make sure that I'm getting in enough good stuff every day that it's the majority of my food intake.  Maybe TV is the same way.  Is my kid getting good sleep?  Outside time?  Play time with mommy and daddy?  Books?  Baths?  Yes?  Ok, then TV is probably not going to be detrimental.  What is detrimental, though, is her mom making arbitrary rules about TV, then being inconsistent with those rules.  I can't declare, "NO TV UNTIL AFTER LUNCH!" one day, and then the next day hit her with Sesame Street the moment she opens her eyes because mommy has an early meeting.  I need to relax and just focus on making opportunities for her to know she is loved and cared for, and if that means sitting on the couch and laughing with her at Peppa Pig instead of doing the dishes because she's entertained, so be it.

December 28, 2014
I'm very excited to try out Adobe Moleskine .  I did my first sketch for Vanishing Veggie .  It was a pretty easy process, although importing the adobe assets was difficult. You take a picture, import it into the Adobe Cloud, and then COLOR! Fun stuff!
4 comments
Read more