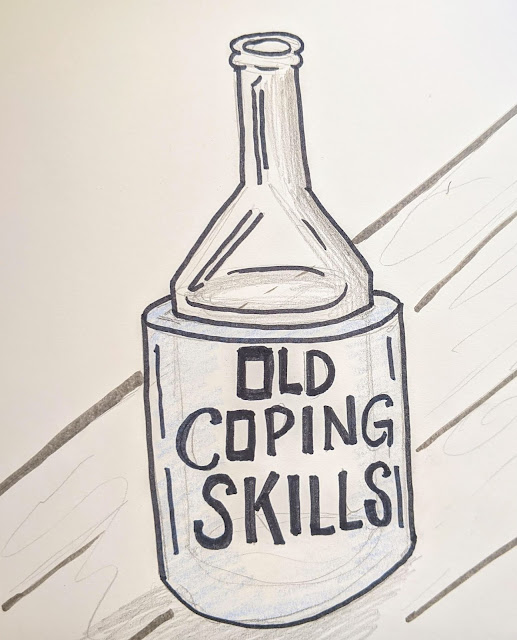 If this pandemic had happened in 2010, my life would have looked very different.  Here's a list of things I probably would have been doing instead of frantically trying to raise children AND be an architect AND keep my marriage together AND pay our mortgage AND constantly worry about the state of the world.


One - Whole lot of drinking

In the Spring of 2010, I was a recent transplant from Fayetteville to Little Rock.  I'd just landed a job after losing my first one out of college the year before to the Great Recession.  Thankfully, Little Rock's economy was doing great, and I was working for a small firm doing municipal and education work.  My then boyfriend, how hubs, had joined me in our tiny (tiny) house near War Memorial Stadium in December of 2009, so we would have surely been in reunited bliss.

Did I mention how tiny this house was?  For me and my pre-Marie Kondo lifestyle, it was barely enough room to house all my junk.  When my hubs brought in all his junk (a futon and some cargo shorts and a few programming books) we were on top of each other.  We had a back yard, so we would have been able to have a bit of outdoor time, but we lived smack in the middle of the city so walking would have been more tenuous.  Of course, grocery delivery services were nowhere near on the scale (did they even exist?) that they are now, so we surely would have been venturing out to Gucci Kroger (got that name from my good friend Mel, because we were so unaccustomed to a regular grocery store that we thought it fancy) for our frozen pizzas, Annie's Organic meals, and beer.  There would have been so.much.beer.


Two - Not a lot of Working

As I mentioned, ten years ago I was just getting settled in a job during a pretty large recession.  If you don't know, architecture is not notorious for weathering recessions well.  People don't build when the economy is bad.  So, I would have gone from one layoff to likely another.  We also weren't set up to work remotely, so that surely would have been an issue as well.  Hubs wasn't even working then.  He'd quit his job to join me in the capitol, starting a game company with a friend from college.  This would have been right at the beginning of their development, but it's possible they could have kept it going.  It's more likely that hubs and I would have just been drinking beer on the back porch.

Skyrim didn't come out until the fall of 2011, so I can't claim that I would have been in an Elder Scrolls hole the entire time, but it's very likely that hubs and I would have been playing some video game non-stop.  We probably would have watched an obscene amount of horror movies as well.

Sometimes, when trying to juggle everything that's going on, I fantasize about what this would have all been like before we had kids.  We're so strapped for any free time that imagining movie marathons and cracking beers on the porch sounds pretty good.  The thing is, had this happened at the beginning of my career, during an already depressed industry, this would have been a huge impetus to my career as an architect.  It's likely I would have been stalled out for years.  My husband and I are so much better prepared to weather something like this, and we're still pretty scared about what's going to happen.  In a way, it's easier, because we have good jobs we can do remotely, a nice house, the ability to order groceries and supplies, and a neighborhood where we can safely take walks.  On the other hand, it gets a bit overwhelming at times because we have created so much for ourselves that we have that much to lose.  Our girls are beautiful, funny, silly little beings, and we want to do everything we can to protect them.   That means protecting our own health.  That means staying home.

So, while it's harder in a lot of ways, I'm thankful this happened when it did.  I didn't have the coping mechanisms I do now, and it likely would have been a scarier time.  It's easy to wish your circumstances were different, but we're all in this at this point in our lives.  So deep breath, we got this.

Summering in the Slush

September 15, 2020
Whew, what a few months. My family and I remain tightly in our quarantine bubble while the world rages around us.  There are so many amazing things happening (Black Lives Matter movement and Social Justice reform, ever more urgent discourse on climate change, recognition that without teachers our world would grind to a halt) and some horrific things (I mean, do I have to name them all....?), but it all became a little too much for my anxiety riddled brain to handle, let alone comment on. So, I did what I usually do in times of stress.  I buried my head in the literary sand.  This time, instead of just voraciously consuming books, I actually sat down to write quite a few short stories this summer.  I also polished off a lot of pieces from the past few years and hit the slush pile.   Newly shiny drafts of horror, light sci-fi, and urban fantasy in hand, I've been scouring the internet and twitter for places to submit my work while looking ahead to what else may be on the horizon.  A
Post a Comment
Read more